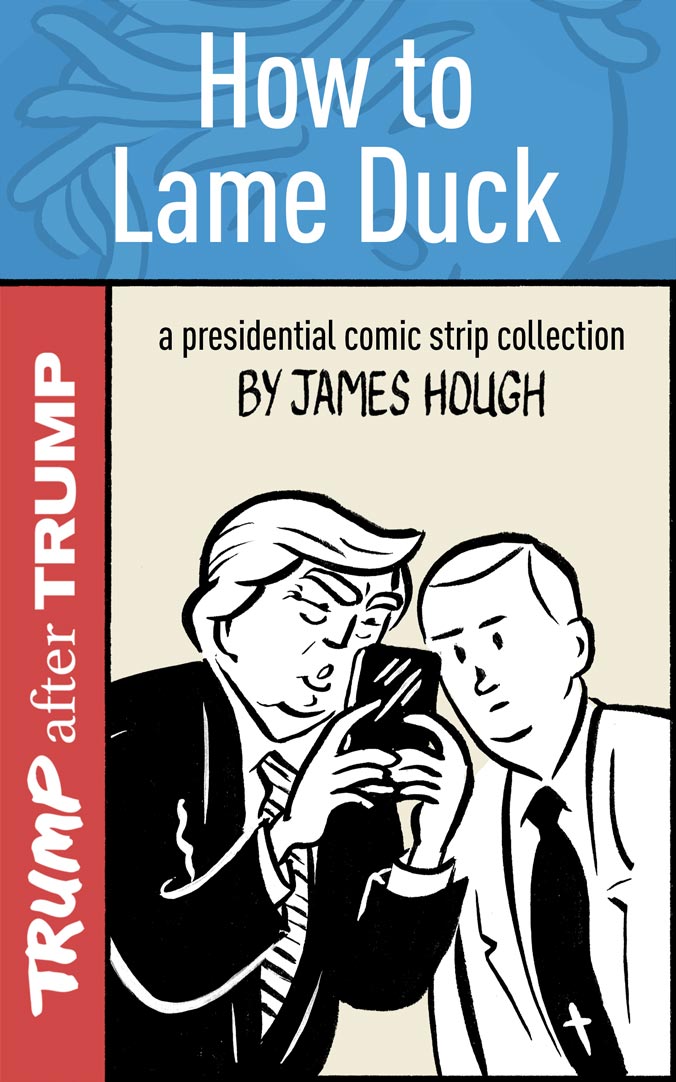 I’m very happy to announce that my new book How to Lame Duck: a presidential comic strip collection is finished and ready to read!

I have been publishing my comic strip Trump After Trump every three days for five months now.

These fifty comics represent the full story arc of a fictional, speculative Trump Lame Duck period, so I have collected them into a single volume for your convenience and enjoyment.

If you or someone you know likes jokes about: then this is the book for you.

How to Lame Duck is available as an ebook exclusively from the Kindle Store.

I’d love to hear what you think about the book. Just leave a comment below or email me your thoughts at james@jimpublic.com.

Trump Is No Longer Our Concern, Right?

Trump and Pence have parted ways in this story, and now Trump is left with the only person who really understands him. Don-Don, the little, stuffed Donald-Trump-looking doll whose face is contorted into a permanent yell.

Where do we go from here? Anywhere? Has this comic strip said all it needs to say? Do I want to continue to draw Trump? These are the questions I’m asking myself right now. I have not told a lot of the storylines that I thought I would tell when I first dreamed up this idea.

I wanted Trump to go to therapy and be under the care of a Latina psychologist; I wanted him to try to befriend black people; I wanted him to start an AM radio show about critical thinking. All of these ideas involve bringing in new characters, which is the most exciting prospect. Fifty comics that are laser focused on Trump can wear a fellow out.

In fact, maybe I could continue the comic strip and just call it After Trump, which is really the thing I’m concerned about. Trump can still be in the strip, but we could explore this whole time we’re in and the time we’re heading toward.

That’s what on my mind tonight. And even though today’s last panel just shows some randos that I made up to symbolize Americans sheltering in place and watching the Presidential Inauguration, it was exhilarating to get to draw someone new!

See all comics in orderWatch the video

Does anyone call Trump “Don” or “Donald”? It’s hard to imagine. Trump is on record as loving when people call him “sir” or “mister president,” so I don’t see why he should change his mind just because he’s no longer president.

Now that it is Inauguration Day in this comic strip, we can bid farewell to the lame duck period. Mike “Bible Mike” Pence is going his own way to preach his message of hope and comfort to the masses. What’s next for Trump?

One answer to that question could be “nothing.” Drawing 49 comics from one storyline has been a great experience for me, and I am happy with the product. That said, I don’t know how much time I want to spend thinking about and drawing Trump, and it’s not like Trump After Trump has blown up to a point where people would be sad to see it go.

For now, I’m writing and drawing, working toward closure. But, as my friend Sean advised, I’ll be sure not to kill Trump off just in case I find that y’all want more Trump After Trump.

See all comics in orderWatch the video